Kodjonya Millennium Presbyterian Junior High School in the Lower Manya Krobo Municipality in the Eastern Region has been temporarily closed down after a machete-wielding young man stormed the school in an attempt to hack a teacher.

The teachers in the school boycotted teaching since the incident occurred on Wednesday, August 11, 2021, in solidarity with the teacher whose life was threatened.

Kasapa News has gathered that the teacher undertaking his National service rebuked a form one Junior High School student in his class over misconduct.

The student who had signed a bond of good behavior with three others for previous misconduct informed his brother about the fact that the teacher scolds him.

On the fateful day, the brother of the student stormed the classroom while the teacher was teaching without permission. He went straight to sit beside his junior brother gazing at the teacher.

The teacher asked him to go out but he refused, forcing the teacher to walk out of the classroom.

The young man also stormed out of the classroom and went to pull a machete from his house. 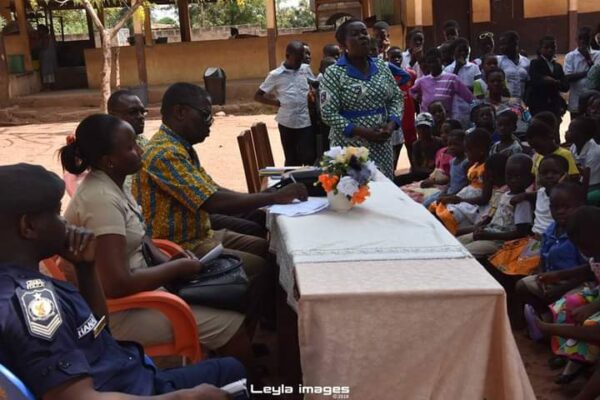 Fortunately, the teacher had stepped out of the school when the man returned with the machete dangerously searching to attack him.

The teachers abruptly closed down the school indefinitely and left to their homes.

The Parents Teacher Association, School Management Committee, and the chiefs and elders in the community together with police mounted pressure on the parents of the suspect to produce him to the police which they acquiesced.

The student and his brother are currently in Police Custody, according to Odumase Police Commander Superintendent Doris Hutikpor.

Kasapa News has gathered that this is not the first time such an incident has happened in the school.

Some teachers have been assaulted and threatened in previous incidents which the Ghana Education Service intervened to avert boycott of academic work by teachers.

The PTA Chairman of the school Joseph Tetteh Wayo told Starr news efforts are ongoing to ensure that the teachers resume work on Monday.

He admitted that threats to the lives of teachers are becoming one too many due to indiscipline in the community.

This site uses Akismet to reduce spam. Learn how your comment data is processed.

Choose the person you love every single day — or leave